Flue gas cleaning systems reduce atmospheric emissions of substances that are hazardous to the environment and health, including heavy metals, dioxins and substances that cause acidification and eutrophication.

We offer both subsystems and fully assembled installations for cleaning flue gases generated by the incineration of hazardous municipal and industrial waste and the combustion of biofuels. Whether designed for new or existing equipment, our wet and dry flue gas cleaning systems are customized to meet customers' specific requirements and comply with current and anticipated regulatory directives.

We provide the following, separately or in combination:

We have helped to develop a concept for turnkey NextBAT® installations that offers exceptionally low emissions and will meet the requirements of the coming waste incineration BREF. 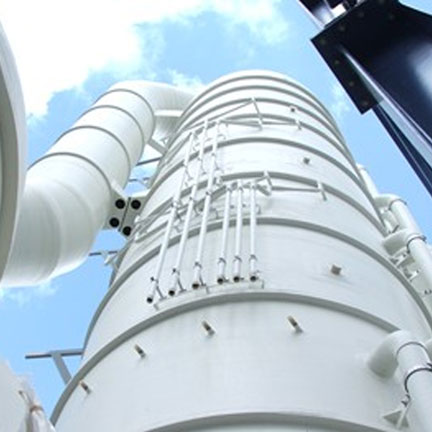 Babcock & Wilcox has a long tradition of focusing on high efficiency and low emissions. Our renewable and environmental segments, together, have an integrated systems solution for the next generation of waste-to-energy plants. The Waste Incineration BREF sets new and higher standards for waste-to-energy plants.

A waste-to-energy plant’s level of efficiency in recovering energy from waste is measured by the R1 formula. High overall energy efficiency ensures maximum substitution of fossil fuels and thereby reduces the impact of greenhouse gases. B&W's NextBAT® solution ensures that plant owners achieve a high R1 rate because of our unique technologies. 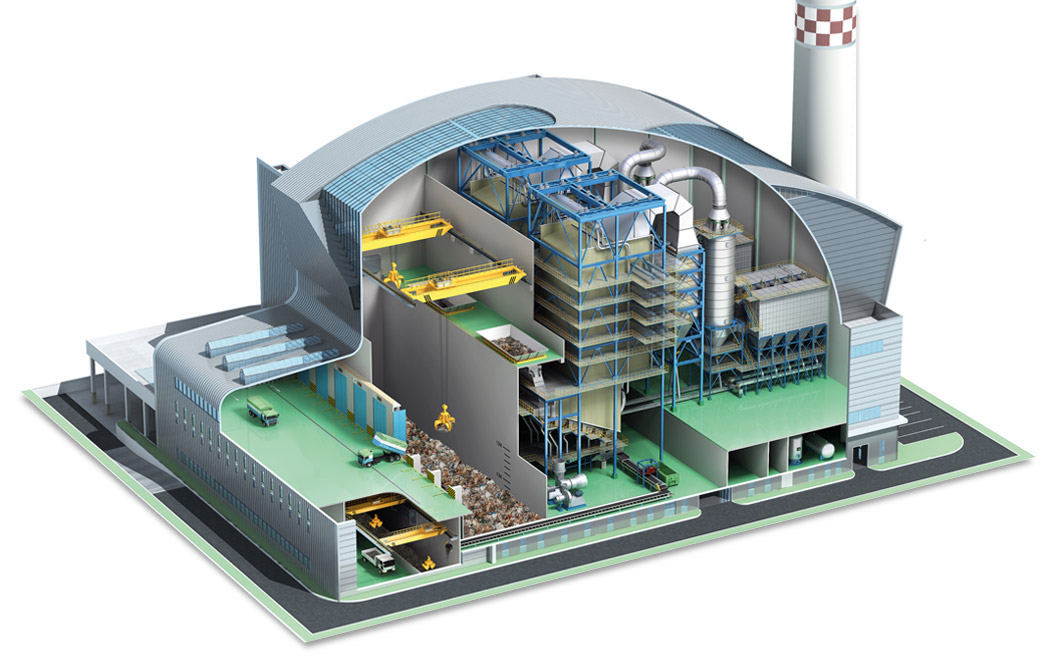 Dioxins are highly toxic substances and can be formed when waste is incinerated. There are, therefore, very strict requirements set for their low emissions. B&W Environmental, through our GMAB product line, offers ADIOX® technology, a dioxin removal solution which has been proven in more than 100 installations worldwide.

ADIOX can be applied in various processes, wherever emissions of dioxins need to be reduced. It is suitable for installation in wet scrubber systems or in other types of containers in a gas cleaning system and at thermal treatment plants for:

ADIOX is produced and delivered in the form of tower packing and droplet separators, with all the conventional advantages these provide. They can be installed in scrubbers and also in dedicated dioxin removal absorbers where the gas is dry or saturated (semi-wet operation).

ADIOX is especially well suited for avoiding the so-called dioxin memory effect or where a multi-functional solution is required with integrated separation of HCl, SO2, HF, Hg and dioxins, in combination with substantial energy recovery through flue gas condensation. ADIOX is available in different sizes and types of tower packing such as knitted mesh droplet separators and lamella demisters. The material is supplied in bulk to end users for installation in existing scrubbers and as components in upgrades or new flue gas treatment plants.

We offer our customers an inspection program in which the material's dioxin content, surface and mechanical qualities are regularly analyzed (usually once annually). The purpose of this procedure is to ensure the installation is functioning well and that the material enjoys maximum economic use. The test results are presented in a report and following repeated analyses, an absorption history is presented for each stage. 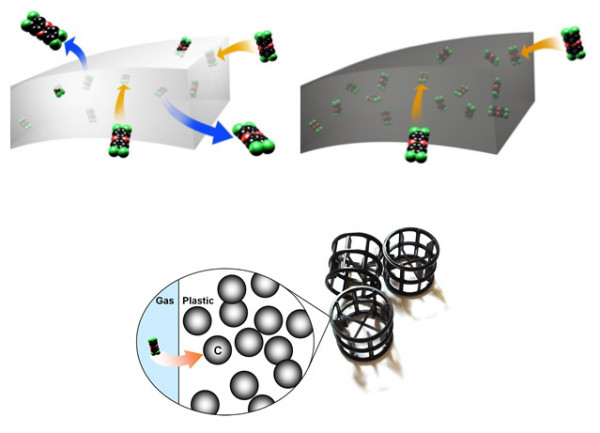 Dioxins in equilibrium between gas and polymer (above left). Dioxins are absorbed in the polymer and bound to the carbon particles (ADIOX, above right)

Our patented ADIOX principle is based on the fact that dioxins dissolve (are absorbed) in polymers and are powerfully adsorbed (bound) to carbon particles. By mixing carbon particles in a polymer, a material is obtained that is corrosion resistant, easy to process and which has a high dioxin absorption capacity.

Dioxin molecules in the flue gas are first absorbed by the polymer, then they diffuse to carbon particles where they are bound powerfully to the surface. The polymer acts as a selective membrane that protects the carbon from substances that do not dissolve as well in polymers, such as water.

Dioxin is absorbed efficiently by various polymers such as polypropylene until equilibrium is reached, which means dioxin desorption can also take place. Typically, dioxins are absorbed during operational disruptions or start-ups when concentrations are high, to be released again during normal operations when concentrations are lower. Small temperature variations can also lead to absorption/desorption equilibrium displacements. This phenomenon is called the memory effect, and can lead to problems in staying under dioxin limits. ADIOX is often used to minimize the memory effect.

This project included the upgrading of the flue gas treatment plant for incineration lines 1, 2 and 3 at Tekniska verken Gärstadverket waste-to-energy plant.

In this 2012 application, B&W (formerly Götaverken Miljö AB) was contracted to supply a multi-stage scrubber system to be positioned after a semi-dry gas treatment system. The unit includes stacked scrubber sections for removal of ammonia and remaining acidid components as well as recovery of energy by flue gas condensation. An absorption heat pump system provides for optimal efficiency.

Vestforbraending is one of the largest waste-to-energy plants in Denmark, producing 140,000 MWh of electricity and 440,000 MWh district heating. This upgrade project included installation of flue gas condensation and integrated absorption heat pumps.

Tower packings and droplet separators are made of ADIOX dioxin removal material. In the event of an upstream failure of the flue gas treatment, ADIOX will act as an additional police filter for dioxins. ADIOX does not cause the memory effects that ordinary plastic material, used in scrubber internals, bring about.