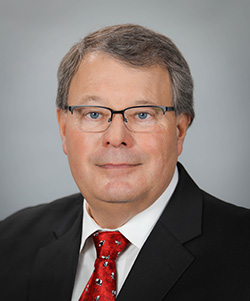 (AKRON, Ohio – April 12, 2022) – Babcock & Wilcox (B&W) announced today that Jeffrey J. Veness has been named the 41st recipient of the 2022 B&W Engineering Honors Award. During his more than 48 years of service, Veness has exemplified a commitment to engineering, integrity, mentorship and professional excellence that has been a hallmark of B&W’s reputation since its founding.

“Jeffrey’s contributions to B&W’s success over the years have been numerous and substantial,” said B&W Chief Technology and Engineering Officer Brandy Johnson. “He is respected by co-workers and customers as an exceptional engineer, a mentor and an invaluable source of knowledge.”

“Jeffrey exemplifies everything the B&W Engineering Honors Award stands for, and I’m tremendously proud to recognize him for his contributions and achievements,” Johnson said.

Veness graduated from The Ohio State University with a Bachelor of Science in Civil Engineering in 1973. He began his career at B&W as a design engineer in the company’s nuclear equipment division and construction operations. From 1977 to 1989, he served as a Construction Technology and Site Engineer on high-profile thermal and environmental projects. He transferred to Field Engineering in 1989 where he served as a Resident Service Engineer from 1989 until 1992, and then continued in Field Service. During his career with B&W, Veness has performed various assignments in support of construction sites and developed strong, practical knowledge of the structural and mechanical aspects of boiler design.

As a respected mentor to co-workers and customers alike, Veness also has led various in-person and online technical training sessions, with a focus on boiler and equipment inspections. He also is recognized for his erection and structural expertise, and for his extensive knowledge of electrostatic precipitators, air heaters, scrubbers and other thermal and environmental technologies. Veness is a Licensed Professional Engineer in Ohio and Indiana and was the 2005 recipient of B&W’s Guy Funkhouser Award, which recognizes the company’s most-outstanding Field Service employees.

The B&W Engineering Honors Award was conceived in 1983 to recognize individuals whose extraordinary long-term contributions, commitment, hard work and efforts have left an enduring mark of excellence on their colleagues, the company and its customers.

Headquartered in Akron, Ohio, Babcock & Wilcox Enterprises is a leader in energy and environmental products and services for power and industrial markets worldwide. Follow us on LinkedIn and learn more at babcock.com.