NOx (oxides of nitrogen) refers to the cumulative emission of nitric oxide (NO), nitrogen dioxide (NO2), and trace quantities of other nitrogen-bearing species generated during combustion. Combustion of any fossil fuel generates some level of NOx due to high temperatures and the availability of oxygen and nitrogen from both air and fuel.

NOx emissions from combustion are typically 90 to 95% NO with the balance NO2. However, once the flue gas leaves the stack, most of the NO is eventually oxidized in the atmosphere to NO2. It is the NO2 in the flue gas that contributes to the brownish plume sometimes seen in a power plant stack discharge.

There are two principal mechanisms of NOx formation in steam generation: thermal NOx and fuel NOx.

Thermal NOx refers to the NOx formed through high temperature oxidation of the nitrogen found in the combustion air. The formation rate is a function of temperature as well as residence time at temperature. Significant levels of NOx are usually formed above 2200F (1204C) under oxidizing conditions, with exponential increases as the temperature is increased. At these high temperatures, molecular nitrogen (N2) and oxygen (O2) dissociate into their atomic states and participate in a series of reactions. One product of these reactions is NO. Since the traditional factors leading to complete combustion (high temperatures, long residence time, and high turbulence or mixing) all tend to increase the rate of thermal NOx formation, some compromise between effective combustion and controlled NOx formation is needed.

Thermal NOx formation is typically controlled by reducing peak and average flame temperatures. Controlled mixing burners can be used to slow the combustion process. A second approach is staged combustion, where only part of the combustion air is initially added to burn the fuel; the remaining air is added separately through overfire air ports to complete the combustion process. A third method is to mix some of the flue gas with the combustion air at the burner, referred to as flue gas recirculation (FGR). This increases the gas weight which must be heated by the chemical energy in the fuel, thereby reducing the flame temperature.

The major source of NOx emissions from nitrogen-bearing fuels such as coal and oil is the conversion of fuel-bound nitrogen to NOx during combustion. Laboratory studies indicate that fuel NOx contributes approximately 50% of the total uncontrolled emissions when firing residual oil and approximately 75% when firing coal. Nitrogen found in these fuels is typically bound to the fuel as part of organic compounds. During combustion, the nitrogen is released as a free radical to ultimately form NO or N2. Although it is a major factor in NOx emissions, only 20 to 30% of the fuel-bound nitrogen is converted to NO.

The majority of NOx formation from fuel-bound nitrogen occurs through a series of reactions that are not fully understood. However, it appears that this conversion occurs by two separate paths, as shown here: 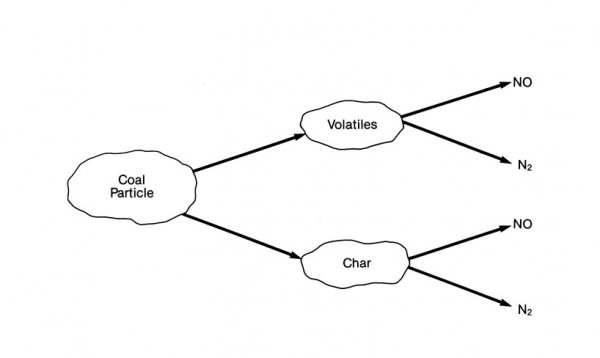 NOx formation from nitrogen contained in coal during combustion

The first path involves the oxidation of volatile nitrogen species during the initial phase of combustion.

During the release and prior to the oxidation of the volatile compounds, nitrogen reacts to form several intermediate compounds in the fuel-rich flame region. These intermediate compounds are then oxidized to NO or reduced to N2 in the post-combustion zone. The formation of either NO or N2 is strongly dependent on the local fuel-air stoichiometric ratio (the ratio between fuel and air at which complete combustion takes place). It is estimated that this volatile release mechanism accounts for 60 to 90% of the fuel NOx contribution.

The second path involves the release of nitrogen radicals during combustion of the char fraction of the fuel. These reactions occur much more slowly than the reactions involving the volatile species.

Conversion of fuel-bound nitrogen to NOx is strongly dependent on the fuel-air stoichiometry but is relatively independent of variations in combustion zone temperature. Therefore, this conversion can be controlled by reducing oxygen availability during the initial stages of combustion. Techniques such as controlled fuel-air mixing and staged combustion provide a significant reduction in NOx emissions by controlling stoichiometry in the initial devolatilization zone.

There are a variety of ways to control NOx in a boiler. Combustion technology-based NOx control is typically the lowest cost solution. In applications where further control is needed, other options include fuel switching and/or post-combustion control, such as selective catalytic reduction, can be considered.

Additional NOx control techniques can be applied downstream of the combustion zone to achieve further reductions. These post-combustion control systems are referred to as selective catalytic reduction (SCR) and selective noncatalytic reduction (SNCR). In either technology, NOx is reduced to nitrogen (N2) and water (H2O) through a series of reactions with a reagent (or reagents) injected into the flue gas. The most common reagents used in commercial applications are ammonia and urea for both SCR and SNCR systems. 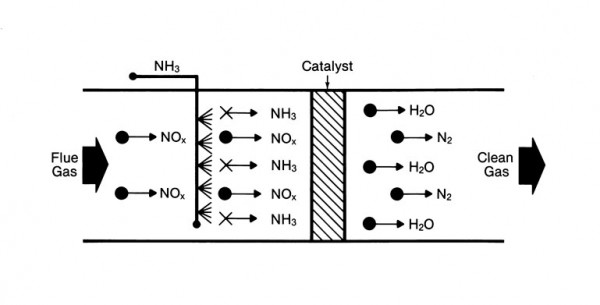 SCR can effectively reduce NOx levels leaving the boiler by 90% or greater depending on the specific application and space availability. SNCR typically is limited to lower NOx reduction levels but may be the more economical choice depending on the required NOx reduction or the unique project requirements. Both technologies have been successfully applied for NOx reduction on multiple fuels and boiler types. 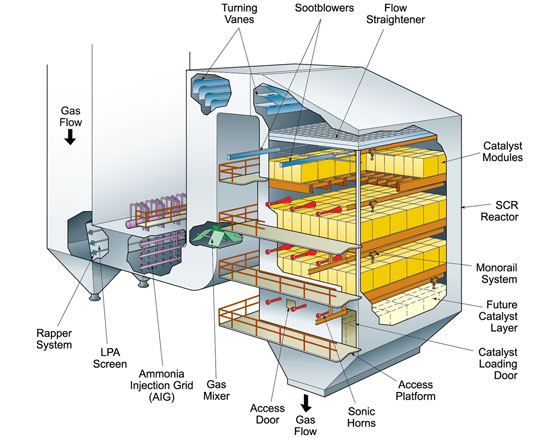 A combination of combustion and post-combustion NOx control is frequently the most economical approach for existing installations and is required for installations that cannot achieve necessary emissions reduction by combustion methods alone.