A Primer on Steam Generation

Most applications of steam generators involve the production of electricity or the supply of process steam. In some cases, a combination of the two applications, called cogeneration, is used. In each application, the steam generator is a major part of a larger system that has many subsystems and components. The illustration below identifies the major subsystems of a modern coal-fired power generating facility. 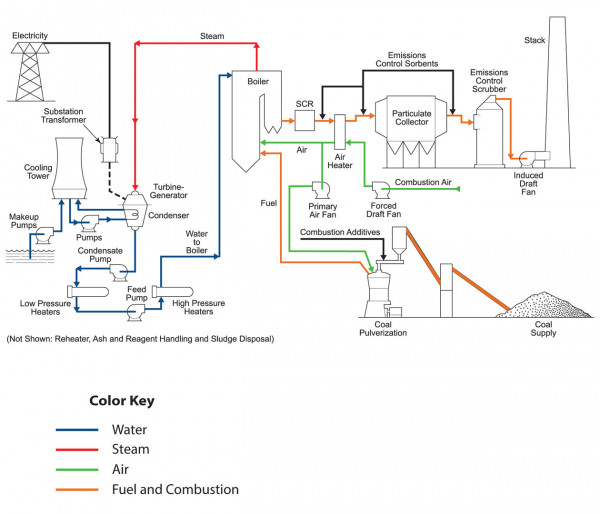 The fuel handling system stores the fuel supply (coal in this example), prepares the fuel for combustion and transports it to the steam generator. The associated air system supplies air to the burners through a forced draft fan. The steam generator, which includes the air heater, burns the fuel-air mixture, recovers the heat, and generates the controlled high pressure and high temperature steam. The flue gas leaves the steam generator subsystem and selective catalytic reduction system if supplied, then passes through particulate collection (electrostatic precipitator or fabric filter) and sulfur dioxide scrubbing systems (either wet or dry) where pollutants are collected, and the ash and scrubber residue are removed. To remove mercury and other hazardous air pollutants, various fuel additives and sorbent injection systems are used throughout the process. The remaining flue gas is then sent to the stack through an induced draft fan.

The steam generator (boiler) evaporates water and supplies high temperature, high pressure steam, under carefully controlled conditions, to a turbine-generator set that produces electricity. The steam may also be reheated in the steam generator, after passing through part of a multi-stage turbine system, by running the exhaust steam back to the boiler convection pass (reheater, not shown). Ultimately, the steam is passed from the turbine to the condenser where the remaining waste heat is rejected. Before the water from the condenser is returned to the boiler, it passes through several pumps and heat exchangers (feedwater heaters) to increase its pressure and temperature. The heat absorbed by the condenser is eventually rejected to the atmosphere by one or more cooling towers. The natural draft cooling tower shown is basically a hollow cylindrical structure which circulates air and moisture to absorb the heat rejected by the condenser. Mechanical draft cooling towers use one or more large fans to move air through the tower.

For an industrial power system, many of the same features are needed. However, the turbine-generator and heat rejection portions are replaced by the process application, such as radiant space heaters or heat exchangers.