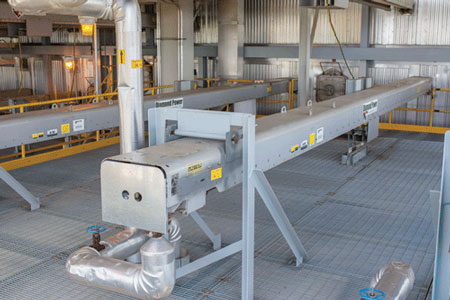 To maximize the thermal efficiency of any boiler and maintain flue gas temperatures within design conditions at key locations, it is important to regularly remove ash deposits that accumulate on heat transfer surfaces. Online cleaning prevents the blockage and plugging of gas passages in the boiler and supports the optimum operation of air emissions control equipment.

The following text provides definitions of key terminology and outlines the methods and types of equipment used for online boiler cleaning.

Peak impact pressure – pressure measured directly along the centerline of the sootblower nozzle at distances downstream of the nozzle outlet. It is maximized by designing the nozzle to achieve a highly concentrated jet at the greatest possible distance from the nozzle outlet.

Jet progression velocity – the linear velocity at which the jet passes over a surface, directing a concentrated jet of cleaning medium. This is a function of the nozzle rotational speed and distance from the surface.

Cleaning radius – the distance that a sootblower can clean a surface when the path between the sootblower nozzle outlet and the surface is unobstructed.

Tube bank penetration – the maximum effective cleaning distance when directed into a bank of tubes.

Lance tube – the tubular component of a retractable-type sootblower that travels into and out of the combustion zone and flue gas passages.

Feed tube – the stationary tube that feeds the cleaning medium to the moving lance tube or rotating element.

Element – serves the same function as the lance tube, but remains permanently inside the flue gas passage.

The discussion on boiler cleaning is separated by regions of the boiler and downstream equipment since different cleaning methods are typically required for these areas.

Furnace walls, slopes and floor tend to collect the noncombustible fuel components. Ash deposits on the side walls and hopper slopes are generally heavier than those found elsewhere in the boiler. When removed, these deposits fall and contribute to bottom ash. Because these ash deposits collect on surfaces that are exposed to intense heat, they may melt at their surface after building to a sufficient thickness.

Depending on chemical composition, the ash may collect in a loosely bound, porous layer that can be relatively easy to remove by online steam cleaning, or the ash may fuse into a dense sheet-like deposit known as slag. Slag removal often requires online water cleaning.

Depending on various conditions, a variety of cleaning devices can be used to clean boiler wall tubes or other heat transfer surfaces located with the furnace. These include: 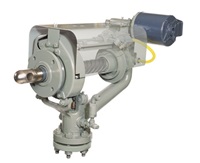 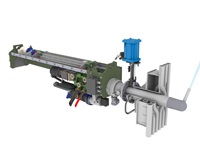 Downstream of the furnace, heat is removed from the flue gas by steam-cooled or boiling-water-cooled wall tubes and convection pass tube banks. Tube banks in this region may include primary and secondary superheaters or reheaters (reheat superheaters).

The first segment of the convection pass is a critical region for online boiler cleaning because this is the first point at which the flue gas encounters narrow passageways between the tubes. The flue gas often contains a substantial concentration of ash particles and the gas temperature may be high enough that the particles are in a semi-molten state. Under these conditions, deposits tend to collect on the leading edge of each tube bank and between tubes that are lined up behind one another.

Deposits in the convection pass are removed primarily by the mechanical impact energy delivered by a retractable sootblower. At the highest temperature locations, the outermost surface of the deposits may be in a semi-molten state, for which mechanical impact alone may not be sufficient. Throughout most of the convection pass, gas temperatures are lower and the deposits are relatively brittle if removed periodically. At even lower temperatures, the deposits are much more porous and are only loosely adhered to the tube surface.

The challenge in the convection section is to properly sequence the delivery of cleaning media at sufficiently high velocity to tube surfaces located within an array of tightly spaced rows and columns.

A variety of solutions and options should be considered when developing an effective plan to clean the convection pass section of a boiler. These include: 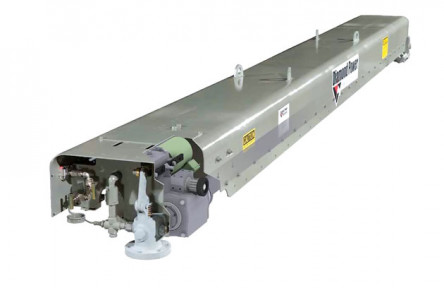 Cooler convection pass banks generally utilize tightly spaced heat transfer surface arrangements. Tube spacing is generally closer because there is less likelihood of deposit bridging. For many fuels, tubes may be finned and positioned in a staggered arrangement rather than a simple evenly aligned arrangement. Deposit characteristics are clearly different in this region, dusty and non-sintered for some fuels, and sometimes accompanied by lightweight clumps of ash (popcorn ash). However, the tightly packed tube arrangement can sometimes be problematic for units firing western U.S. or other subbituminous coals.

Ash deposits in this region often begin as a thin layer of dust on the tubes, which may eventually accumulate on the leading edge of the tubes. Fixed position sootblowers may be used where the deposits are dusty or loosely adhered. When more energy is required, for example due to ash compacted between radial fins on the boiler tubes, rake-type sootblowers may be used. When ash deposits are loose or accumulated in unstable buildups, sonic horns operated at optimal frequencies may be effective.

The more common and reliable cleaning method for selective catalytic reduction (SCR) system catalyst is by sootblowing with steam or air. Catalyst blocks have also been cleaned by acoustic devices where site-specific conditions allow.

Sootblowers clean ash and ammonia salt particulate with relatively low velocity steam directed toward the catalyst assembly. The cleaning medium is almost always steam, but air is an alternative. The steam velocity is low in comparison to boiler sootblower applications to avoid mechanical or erosive damage to the catalyst substrate, yet high enough to dislodge loose particulate in the catalyst channels and re-entrain them in the flue gas flow. However, even at this relatively low velocity, it is critical to avoid moisture in the steam which can be erosive or cause thermal shock on some catalyst designs.

Regenerative air heaters, common in utility steam generating plants, are susceptible to ash particles collecting between the corrugated heating surface elements or baskets. Some flow path blockage occurs at the leading edge of the element. Some particles collect loosely on the basket gas inlet and smaller particles become wedged between the corrugated plates. Most of the pluggage that occurs in the baskets, however, is an accumulation of fine particles that adhere to moistened surfaces near the cold end of the channels. The moisture is generally a result of flue gas dew point precipitation. Ash particles may also attach to ammonia salt deposition if an SCR is located upstream of the air heater.

Deposits are removed from the corrugated heating surface by means similar to SCR catalyst cleaning applications such as straight-line sootblower. Swing arm sootblowers and dual media cleaning devices can also be used. Cleaning media must be aimed directly at the gas inlet face of the heating surface with relatively low velocities. This will prevent the thin metal plates from being deformed or fatigued by flow-induced vibration. 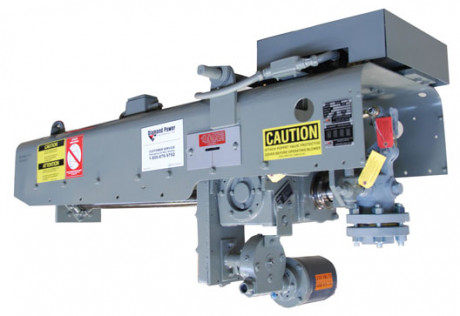 Tubular air heaters are generally not as heavily fouled as regenerative air heaters because their design affords less opportunity for deposits to collect. Most commonly, the flue gas passes through the tube side of this air heater design. Ash particles collect loosely on the inside walls of these tubes. In the cold end of a tubular air heater there is the potential for dew point precipitation. This condensate will act as a wetting agent and promote fouling. 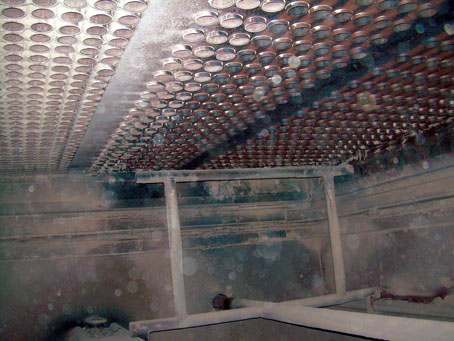