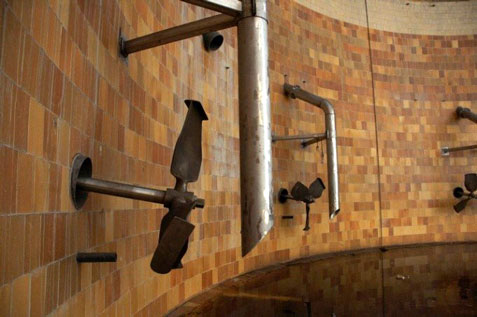 The differences between gypsum products depend on the amount of impurities or the degree of dewatering. In addition, the LSFO system is less prone to scaling compared to a natural oxidization system and as a result, requires less outage time. The LSFO wet FGD process incorporates air injection to ensure a fully oxidized gypsum product. The introduction of air into the absorber reaction tank creates calcium sulfate (gypsum) as a marketable byproduct.

A wet FGD can be converted to forced oxidation using the existing reaction tank, or in some cases, an external oxidation tank can be used. This conversion will minimize scaling from utilization of stable system chemistry and creating a saleable byproduct which will decrease disposal costs.

Air sparge grids and air lances with mechanical agitators are the two generally applied methods of injecting oxidation air into the process. The method to inject oxidation air has an impact on plant costs and system operating requirements. The sparge grid is a multiple air header arrangement with evenly spaced bubble stations across the vessel plan area. The sparge grid is prone to nozzle plugging if the oxidation is not constantly passing through the absorber tank whenever it contains slurry. The lance system consists of air pipes directed to a region in the liquid jet created by side entry mixers. Figure 1 shows a typical air lance injection system.

The performance of the lance system is influenced by the energy of the fluid jet (mixer power) and the submergence depth (air blower power). The performance of the sparge grid is less dependent on the mixer power and is, to a much greater degree, influenced by submergence depth. When upgrading an existing wet FGD, a general review of the capacity available in the existing absorber recirculation tank is required. In some cases, a sparge grid or lance system can be retrofit into the existing tank. If there is not enough residence time available, an external oxidation air tank may be required.