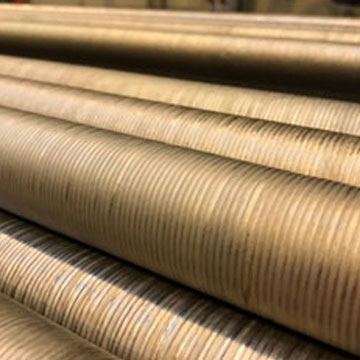 Effect of Operating Variables on Fuel Ash Corrosion in Boilers

Regardless of the firing method, when coal is burned, a relatively small portion of the ash will cause deposition problems. Ash passing through the boiler is subject to various chemical reactions and physical forces which lead to deposition on heat absorbing surfaces. The process of deposition and the structure of deposits are variable due to a number of factors. Particle composition, particle size and shape, particle and surface temperatures, gas velocity, flow pattern, and other factors influence the extent and nature of ash deposition.

The two main categories of high-temperature ash deposition are called slagging and fouling. Slagging is the formation of molten, partially fused or resolidified deposits on furnace walls and other surfaces exposed to radiant heat. Slagging can also extend into convective surface if flue gas temperatures are not sufficiently reduced.

Fouling is the second form of ash deposition and is defined as the formation of high temperature bonded deposits on convection heat absorbing surfaces, such as superheaters and reheaters, that are not exposed to radiant heat. In general, fouling is caused by the vaporization of volatile inorganic elements in the coal during combustion. As heat is absorbed and temperatures are lowered in the convective section of the boiler, compounds formed by these elements condense on ash particles and heating surface, forming a layer which aids deposition.

Areas where slagging and fouling can typically occur are shown here: 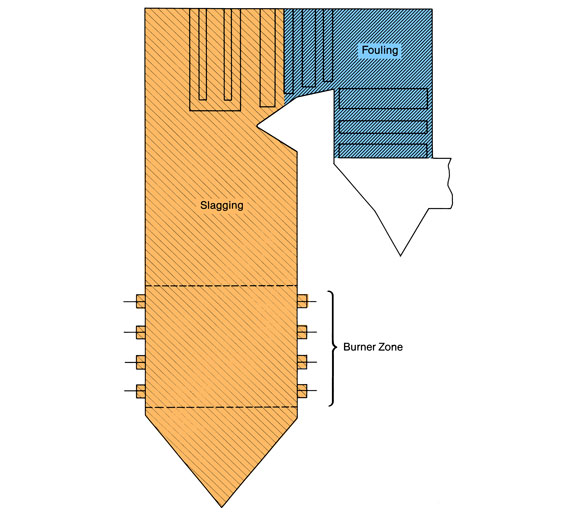 Although the dominant factors affecting deposition are ash characteristics and boiler design, operating variables can also have a significant impact on slagging and fouling, especially for units with low NOx combustion systems. These variables include air distribution, fuel distribution, coal fineness and excess air.

Air and fuel imbalances within the ducts and coal piping system can result in high excess air at some burners while others operate with less than theoretical air. Localized reducing conditions in the burner zone may develop as a result of the air and fuel imbalances. The localized reducing conditions can aggravate slagging, especially with coals having high iron content. High coal-air ratios can also delay combustion, upset heat distribution, and may result in elevated temperatures in the upper furnace and at the furnace exit. Long burnout times may also increase the potential for burning particles to contact furnace walls and other heat transfer surfaces.

Secondary air imbalances can be minimized by adjusting individual burner flows to more equally distribute the O2 concentrations at the economizer outlet. Care must be exercised to avoid burner adjustments that cause flame impingement on furnace walls.

Low pulverizer fineness can also cause problems associated with delayed combustion. Coarse particles require longer residence times for burnout and can cause slagging in the lower furnace.

Excess air has a tempering effect on average temperatures within the furnace and on furnace exit temperature. Excess air also reduces the potential for localized reducing conditions in the furnace when it is introduced through the burners. Air infiltration into the furnace or convection pass is far less beneficial and should be corrected or taken into account when establishing excess air requirements.

Sootblowers are the primary means of dealing directly with furnace wall slagging and convection pass fouling. The most important fundamental requirement is to use this equipment in a preventive, rather than corrective, manner. Sootblowers are most effective in controlling dry, loosely bonded deposits that typically occur in the early stages of deposition. If furnace slag accumulates to the point that it becomes plastic or wet, or if convection pass deposits build and sinter for long periods of time, removal becomes much more difficult. Sootblower sequencing requirements must be established by initial operating experience and updated when required, especially when fuel characteristics change.

The least desirable operating technique for controlling deposition problems is load reduction. The most severe situations may require a significant decrease in unit capacity. However, in many marginal situations, temporary load reductions during off peak periods may provide sufficient cooling to shed slag and allow sootblowers to regain effectiveness.

Awareness of the extent and degree of the existing slagging and fouling conditions throughout the boiler is critical to achieving unit reliability and availability. However, boiler surface cleanliness has traditionally been one of the most difficult operating variables to quantify. Typical indications of surface fouling appear to the operator indirectly in the form of steam temperatures, spray attemperation flows and draft losses (gas resistance). In some cases, experienced operators who are familiar with the operating characteristics of a unit can make judgments on slagging and fouling conditions based on operating conditions, but these secondary indications can be misleading. For example, the furnace can be slagged, causing undesirably high flue gas temperatures entering the convection surface. However, the steam temperatures and spray attemperation may be normal if the convection surfaces are also fouled.

Another indication of surface cleanliness is draft loss. By watching draft loss across a bank, an alert operator can determine that sootblowing is probably required. Usually, however, by the time a change in draft loss is detected across widely spaced pendant sections, the banks are already bridged and it may be too late for effective removal of the slag by the sootblowers.

Visual observation is frequently used to further quantify cleanliness conditions. In many instances, however, access is limited and subjective evaluations can leave considerable room for error. Advanced methods have been developed to overcome these shortcomings and to improve upon traditional time-based sootblowing control.

Computer-based performance monitoring systems can provide a direct and quantitative assessment of furnace and convective surface cleanliness. B&W’s Heat Transfer Manager® program is based on the heat transfer analysis software that has been developed over many years for boiler design and validated by extensive empirical data. The Heat Transfer Manager program is configured on a boiler-specific basis, taking into account the arrangement of the furnace and all convective surfaces. Measurements of temperatures, pressures, flows, and gas analysis data are used to perform heat transfer analysis in the furnace and convective section of the boiler on a bank by bank basis.

Advanced intelligent sootblowing systems have also been developed to combine this real-time assessment of furnace and convective surface cleanliness with closed loop control of the cleaning equipment. B&W’s Titanium® boiler cleaning control system automatically determines where and when sootblowing should occur in the furnace and convection pass. The system uses real-time cleanliness data from the Heat Transfer Manager program in an expert decision-making structure that dictates when blowers should be cycled.

Intelligent systems detect problem areas early in their development, so that selective sootblowing can be directed at a specific problem area and ash cleaning equipment is operated based on need. Intelligent sootblowing systems can optimize blowing medium use and improve performance while reducing tube damage and providing consistency to boiler operations.

Recently, more attention has been placed on proper management of the boiler furnace. Mismanagement of the furnace cleaning can lead to higher fouling and slagging rates in the convection pass. In practice, the most effective means of controlling furnace cleanliness is to track its actual performance compared to its expected performance. Furnace cleaning should only occur when furnace performance is sufficiently degraded. The Titanium system has proven effective with this philosophy when controlling traditional wall blowers (using air or steam) and waterlances.